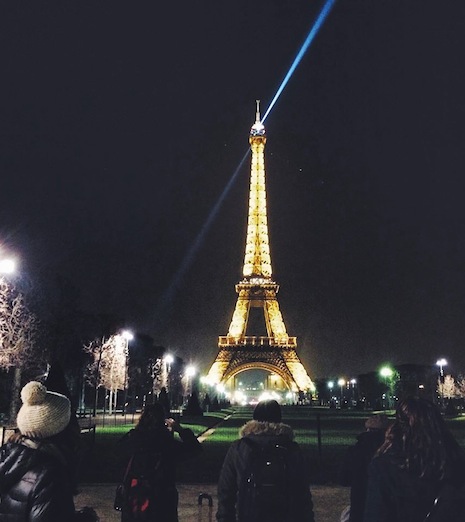 We’re back home in Montreal, jet-lagged and freezing, but while it’s fresh I want to share our experience of living in Paris, and of last week’s crazily successful Elevator World Tour – the fourth city on our whirlwind tour of the most impressive Startup cities in the world.
To immerse myself in Paris startup culture, I moved my entire family there a full month ahead of the actual event date. We lived through the wall-to-wall sidewalks of the tourist-packed holiday season; the enormous tragedy of the Charlie Hebdo attacks; the spirit and unity of Parisians; and then finally a rocking event inside a monument that needs no address, let alone a description: the Eiffel Tower!

Life in Paris is not far from the fairy tale outsiders think it is. The city is beautiful, the monuments are endless, the museums are inspiring and the baguettes are not only outstanding, they are on every corner. Baguettes are to Paris what bagels are to Montreal, truly inherent to the French culture. A true luxury to eat no doubt, yet one all Parisians can still afford. After all, life is always sweeter when you can eat warm, fresh bread at the beginning, middle or end of any day. This was an experience my family will never forget.

We were in Paris the day of the Charlie Hebdo attacks and subsequent terrorist attacks that took place. As a foreigner with family in the city I felt vulnerable at first. I was afraid, in the same way I was after 911. By contrast, the Parisians around were far sadder than afraid in the hours immediately following the attack. And then quickly, sadness turned into stoic pride and unity. While messages of Je Suis Charlie circulated the globe, in Paris they were on every corner and in every window.

Parisians epitomize a spirit of unity attitude, the Sunday rally an incredible show of resilience and social pride. And in the days that followed, it was the little things that made the French culture distinct to me, like the metro system being free the day of the rally. Intentionally or not, this seemed as a message that all citizens are free to come stand in solidarity for their culture and freedom.

In Paris, we learned firsthand how differently cultures respond to terror. For those who follow the Elevator World Tour, you’ll remember that last November we were scheduled to run an event at One World Trade Center in New York City. Sadly, the building managers canceled our event with less than 2 weeks’ notice, citing security concerns, despite the lack of any immediate public threat.

Ironically, the Charlie Hebdo attacks also occurred less than 2 weeks before the event—on another continent in another famous building. I would not have been surprised if the authorities had chosen to cancel our event.

Instead, after a meeting with those responsible – during which I was again so impressed by the cohesive stand of unity in the face of danger – it was clear that cancelling was not even a consideration. Business as usual was the overarching tone, sending a clear message that we cannot give into fear that today may be our last, but live as though the future depends on us standing up for what is right. The impact of this experience, as you can surely tell, was real. My fear turned to pride, and I stood tall with all Parisians in the most revered building, in perhaps the world’s most revered city.

Working in Paris was more enjoyable and less stressful than expected. The Paris startup community is large; even with a month, there is no way to touch all corners of this vibrant scene. This was our first event in Paris, and the first time doing it in partnership with a local team — 50 Partners, a local French accelerator. I cannot sing the praises of this team highly enough. Not only do they connect with the highest levels in government, they are also extremely well respected by the angel and startup community.

We were lucky enough to work out of the 50 Partners Loft, which houses some 30 early stage companies. 50 Partners is not a typical accelerator; they offer solid and guaranteed mentorship from 50+ of the top business angels in the city, in exchange for a small amount of equity. I would gladly partner with this team again.

I also met other people instrumental to the Paris startup community, from organizations like France Digital, The Family, and the Rude Baguette. I went to a 700-person Founders Event and did as much just walking around talking to people as time would allow. Parisian startups are highly focused on solving problems for people that live in big cities, everything from delivery services to sharing applications. For example, the winner of the Eiffel Tower Elevator Tour was a local startup called Glowee, a company developing bio-illumination solutions (lighting using organisms not electricity).

By all accounts, the event was a resounding success. A sold-out event in the world’s most recognized tower, with over 300 people in attendance, and 65 pitching startups (each having a precious sixty seconds to pitch in the century-old elevator) and a single winner that walked away with a record $110,000 investment. Not bad for a quirky idea that started in a one-floor elevator in Montreal’s old port three years ago.

When we started the Elevator World Tour, our dream was to host an event in the Eiffel Tower elevators. People called us crazy, but here we are a group of crazy Montrealers that pulled it off. Where to next? Hong Kong, Panama City, Shanghai, Barcelona….who knows? For now, we turn our attention to making sure Startupfest this summer is the best ever. We will be announcing our speakers soon. Hope to see you there.