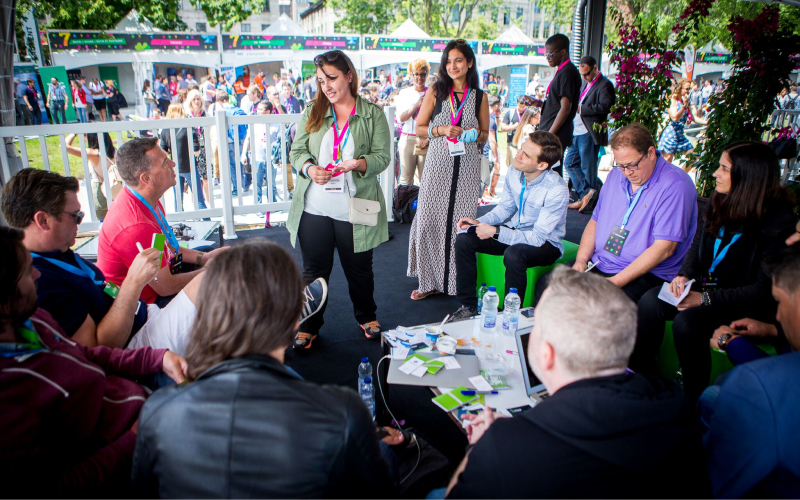 Ms. Adelson has been investing in growing companies for the past 30 years. With over 15 angel investments over the past 8 years, as well as investments in numerous funds and funds of funds, Ms. Adelson’s contributions to the startup community have touched nearly every industry in the Quebec startup ecosystem. With a degree in Commerce from McGill, Ms. Adelson brings her skills in finance, strategy and behavioural elements of business into every deal she explores. Her ability to identify critical success factors and obstacles have led her to a career of interesting investment opportunities and ongoing business relationships.

A consummate « student of investing », she keeps current with the latest business and technological developments, hones her analytical skills and polishes her professional skepticism through attendance of trade conferences, reviewing business plans and communication with various professional advisors. She is an active member on several boards of both for profit businesses and non-for profit organizations.

Ms Adelson is extensively involved in philanthropic ventures, an area close to her heart. She always seeks opportunities to use her skillset and relationships to amplify the efforts of socially minded organizations. Ms. Adelson has been recognized for these efforts as the recipient of several awards highlighting her invaluable contributions to society.

Francis Baillet was Vice President of Human Resources at Ubisoft Divertissements from 2007 to 2013.  Since April 2013, Francis is Vice President, Corporate Affairs. The organization currently employs over 5,000 people in its studios in Canada: Montreal, Quebec, Saguenay, Piedmont, Halifax, Toronto and Winnipeg.

Francis has twenty years of experience in human resources management. He was Vice President, Human Resources and Corporate Affairs at Bell Business Solutions (previously known as Nexxlink Technologies). He also was Director of Global Compensation for North America at Rexel, Director of Benefits at Westburne and a pension consultant at Towers Perrin.

Growing up with the “SAPUTO” name was both a blessing and a challenge for Patricia: a blessing because the name was very reputable in the province of Quebec where she grew up, and a challenge because people just assumed that coming from a successful and wealthy family, life was easy and full of opportunities.

Her father, Francesco Saputo, advocated that education was very important and that it would make his daughters self-reliant and not be taken advantage of by others. With that advice, Patricia became a CPA, and furthered her education in tax, investments, life insurance and succession planning.

After leaving Deloitte in 1998, she began a new path that allowed her to manage the patrimony of her immediate family in pioneering the startup of the family’s “Family Office” that further developed into the areas of family governance, managing wealth as it is transitioned to future generation so they become responsible stewards of their own wealth.

This allowed her to pioneer and launch the “Family Wealth Program” with 2 Canadian Universities. She is very generous with her time as she sits on a variety of boards and advisory committees. She is also a regular speaker at a number of International Forums. She has been invited to speak on numerous occasions in the areas of family wealth, women and wealth, education, philanthropy and financial literacy. She believes that education is an incomplete process which is why she considers herself a “life-learner”.

Now a veteran Judge at the festival, Cary has been working for over 25-years to bring companies to the next level as a hands-on Angel Investor, seasoned C-Level Executive, active Board Member and a very outspoken accelerator program Mentor.
After co-founding and successfully bringing Web APM company Coradiant to exit, he’s managed several prosperous ventures, including Stack8, where he currently leads operations for the global leader in Unified Communications solutions. He has over 300 million dollars in exits under his belt and is a strong proponent of boosting Canada’s tech scene on the world scale.

Mrs. Lamothe has over 20 years of experience in the competitive digital and consumer products world (Google, L’Oréal, Procter&Gamble, Clairol). She is best noted for her expertise in Global Product Management and Omni-Channel Profitability. Ms. Lamothe is the President of Tandem International, an advisory firm specialized in omnichannel profitability and a Professor of Practice at McGill University (Desautels Business Faculty). From 2014 to 2018, she acted as a Managing Director at Google in Canada.

She held several executive positions at L’Oréal between 2002 and 2014, from International Marketing Director in France, to Chief Marketing Officer and Chief Corporate Communications Officer in Canada.

Ms. Lamothe also serves on the boards of Lightspeed HQ, OSMO and the ALDO group. She was previously a Director of Jean Coutu Group PJC Inc. from July 2016 until the privatization of the company in May 2018.

Since 2016, she has been appointed by the Treasury Board of Canada to the Audit Committee for Ministries such as Employment and Social Development Canada (ESDC) and the Canadian Border Services Agency (CBSA) and nominated by the Canadian Revenue Agency (CRA) Commissioner to its external advisory panel.

Ms. Lamothe was also appointed to the 2017 Advisory Council on Economy and Innovation for the Government of Quebec and was a Member of Canada 150 Research Chairs Multidisciplinary Review Panel which aims to award research chair positions to Canadian universities and enhance Canada’s reputation as a global center for science, research and innovation excellence.

She completed INSEAD’s L’Oreal management program in France and earned a dual bachelor’s degree in mathematics and economics, with honors, from the University of Montréal.

Steven Abrams is a partner in the IT Venture Fund. He joined the BDC in 2001, after almost nine years in investment banking with Scotia McLeod and two years as CFO of an interactive advertising agency. As a director in corporate finance, he participated in many IPOs, privatizations, M&A advisory mandates, and equity and debt financing for companies in sectors, including technology, transportation and telecommunications. For an Internet company, he raised a first round of venture capital, did three acquisitions, two startups, and helped grow the company from 20 people to 145. Mr. Abrams holds an MBA in Finance from Cornell University and Bachelor of Science in Mathematics and Computer Science from McGill University.

Anna Goodson is the Founder & President of of Anna Goodson Illustration Agency and has spent the last 25 years working with creatives and promoting their work. She is passionate, innovative and is considered a leader and trend setter in her field.

Having launched her first startup back in 1996, Anna has always been interested in technology and is an active member of the Startup community in Montreal as a Mentor, Speaker and Angel Investor.

Anna has been on the Jury of Startupfest since the beginning and was one of the first women on board.

Josh is the founder and managing partner at BoxOne Ventures, an asset management firm whose VC activities are focussed on early stage companies across several sectors including fintech, applied ML/AI, synthetic biology/biotech, crypto/decentralized finance.Prior to BoxOne, Josh Felker was the co-founder of the Montreal based proprietary trading firm Vigilant Global. A leader in the most latency sensitive and technology driven areas of trading, Vigilant was an early pioneer in the use of FPGAs and wireless communication technologies in financial markets. Vigilant was acquired by proprietary trading firm DRW Trading in 2012. As partner at DRW, Josh helped oversee a highly diversified global trading firm spanning liquidity provision operations, risking-taking/directional trading, real-estate, venture investing as well as cryptocurrency trading.Josh has a degree in Genetics from Western University and is a father of three.

Adrian Salamunovic is the co-author of  FREE PR a book that is focused on helping entrepreneurs grow their businesses using the power of free media exposure without having to hire a PR agency. Previously, he founded CanvasPop and DNA11, which he bootstrapped to 8-figure sales. Previously he helped to launch MyFax.com, which sold to J2 Communications for over 200M dollars. He is also a public speaker, startup advisor, investor, and PR expert who is passionate about helping entrepreneurs amplify their companies. Adrian has strategized the launch and continued success of many businesses, helping both his own and his clients’ companies generate hundreds of millions of free media impressions. He is a global mentor for San Francisco based 500 Startups and and is the #1 rated advisor onClarity.fm

Allen Lau is the CEO and co-founder of Wattpad, the global multiplatform entertainment company, where he leads the company’s vision to entertain and connect the world through stories. A leader in Canada’s technology sector and startup ecosystem, Allen is a member of the Canadian Council of Innovators, a lobby group that advances the interests of Canadian technology companies at all levels of government. He is also the co-founder of Two Small Fish Ventures, a fund that invests in Toronto and Waterloo-based early stage internet companies with strong network effects.Prior to Wattpad, Allen co-founded FeedM8, a mobile advertising company that was later acquired. He also previously co-founded Tira Wireless, where he helped leading brands optimize content for mobile delivery.Allen received his Bachelor’s and Master’s degrees from the University of Toronto’s Electrical Engineering program.Find Allen on Wattpad and on Twitter: @allenlau

Solon Angel is a loud speaking enterprise serial innovator, visionary founder and Chief Strategy Officer of MindBridge Ai makers of the AI Auditor, a world’s first. His time in Silicon Valley shaped his philosophy of watching trends and building product-centric companies that solve massive market problems. Solon’s years of experience in high-tech firms ranging from ERP, CRM, venture capital to AI expert systems make him the perfect technology strategist to reshape how organizations around the world gain new insight on the wave of change now called the 4th industrial revolution. He spends most of his time travelling, helping other founders part of FreshFounders or fishing with his two daughters.