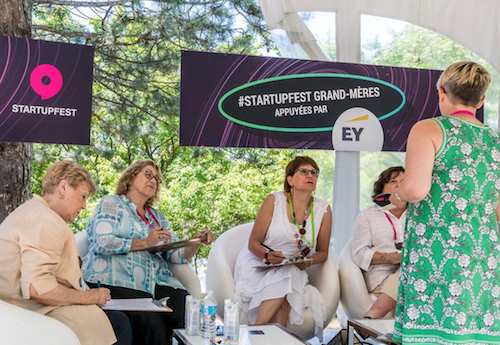 At first blush, a panel of grandmother judges at a startup competition may inspire a notion of: “Well if a grandmother can understand it, anyone can.”

But that would be a wrongful assumption. Blessed with the experience only decades of seeing right through BS can grant a person, Startupfest’s grandmother judges can destroy a bad pitch. And this year, they’re back and better than ever.

You may remember them as the judges who picked Onavo — the company that went on to be acquired by Facebook for a cool $150 million — as the clear winner of the grandmother prize in 2012. And last year’s Grandmothers’ Choice award went to Revols, the custom-earphone maker that recently raised $2.5 million in Kickstarter pre orders.

As one of the most popular pitch contests at Startupfest, countless entrepreneurs line up each summer to make their cases to the grandmothers — and for good reason. These ladies can see a good idea (or a bad one) from a mile away, and they certainly have no qualms about calling it as they see it.

The winner of the (non-cash) grandmother prize may not walk away with newfound riches; they will, however, leave with a treasure-trove of good advice. So, come and test you and your startup’s mettle at the grandmothers’ judging tent in Startupfest’s Tent Village.

Daniele Henkel is a businesswoman who created a strong and unique brand in the province of Quebec. Her eponymous company aims to reconcile health and business with the installation of care facilities within the workplace, thus enforcing the concept of wellness as a new social norm in the business world.

Daniele Henkel is at the forefront of the fight for a stronger corporate Quebec and a fierce advocate of the promotion of women entrepreneurship in Quebec; she does not hesitate to finance, support and mentor businesses in which she believes in, as demonstrated during her five seasons on Quebec’s Dragon’s Den.

A mother of four and a family woman, Daniele Henkel manages her business with the help of her children. While life has not always been easy for the intuitive entrepreneur, her obsession to create a softer, more caring world remains.

Facilitator at several conferences on technology, mentor for startups and judge at Startupfest, Orly has been a consultant mainly with IT Companies and has held various executive positions at Bell for several years. She is a Laughter yoga trainer and a volunteer at Le Havre listening center.

Doreen Rouse Croll was born in England. She has an Honours Degree in Zoology with a Special Honours in Parasitology from Imperial College, London University and a Diploma in Education from McGill. Before retirement, Doreen taught in England, California and Montreal. Her two greatest achievements are here at Startupfest!

Born in Cairo, Egypt, Sonia obtained a B.A. in Psychology from Concordia University and a Masters in Industrial Relations from the Université de Montréal. For years she’s owned and operated a special events company in Montreal. In her spare time, Sonia enjoys playing bridge, completing crossword puzzles and swimming. Sonia is a proud grandmother of 5!

With over 30 years of teaching experience, our newest judge has her degree in Special Education from McGill and her PhD in being a Bubby (a Jewish term meaning grandmother). Merle is a mother of three remarkable children and grandmother to two granddaughters. Raising a young and very ambitious entrepreneur like Harley (COO @ Shopify) meant she was required to be an administrative assistant, business manager, and a coach. Merle now enjoys travelling and spending time with her family. After beating breast cancer twice, her motto is: “Life is short, laughter is sweeter.”